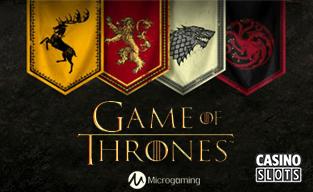 Launched back in 2014, the Game of Thrones slot from Microgaming has been a huge success, but it's now time for an update. The developer has just announced that a brand new Game of Thrones online and mobile slots game is coming in 2020.

Game of Thrones Power Stacks will feature images of the main cast from the iconic TV series, along with exciting bonuses that will capture the magic that made it so popular.

The new game takes players on an epic journey through Westeros. It's being developed by Slingshot Studios under a licensing deal with HBO. The TV series has become legendary, with up to 19.3 million viewers watching each episode across all platforms. In its 7-year run, Game of Thrones garnered 160 Emmy nominations, winning 59, and 7 Golden Globe nominations, scooping 1.

The original Game of Thrones slot from Microgaming used images of the Houses of Westeros and was available in 243 Ways to Win and 15-line versions. The new game promises to upgrade the graphics to include images from the show.

It's being previewed at the ICE London event this week, before being put on general release later on in the year.

We are excited to extend our partnership with HBO to supply a new Game of Thrones online slot that honours and builds on the brand’s immense popularity. In the spirit of the show, we will be working hard to deliver a quality, feature-rich slot game.''