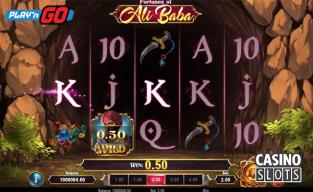 Play'n GO has announced the release of their new Fortunes of Ali Baba slots game. It's themed around the ancient fable of a man who discovers hidden treasures and the forty thieves who want to keep it for themselves. The slot manages to weave in many parts of the story, including several characters and the valuable riches.

The 5 reels, crossed by 20 paylines, are set in the mouth of a cave. Symbols include playing card icons, jewels, daggers a thief, Ali Baba and the servant girl who saves the day.

Ali is a wild symbol who can substitute for others if needed, while the girl is a scatter symbol who triggers a free spins bonus round when she lands in 3 or more places at once.

Players have to complete a special task before the bonus games begin, picking from a series of vases within the cave to unlock win multipliers or to start the free games. If a thief catches them before they find the free spins vase, the round ends, but the win multipliers are a nice consolation prize.

If the free games begin, Ali is seen in each of the 8 spins, and there is a second thief wild symbol in play. This wild triggers a further respin of the reels, with all wilds locked in place. Thief wilds then move towards any Ali Baba wild symbols, leaving even more thieves in their wake.

The Fortunes of Ali Baba slot is a high volatility game, with average payouts set at a generous 96.89%. With the perfect combination of symbols across the reels, players can collect a massive win of 9,968x their total stakes.

Wagers can be as little as 0.20 per spin, or as much as 100.00, making it a game to match most bankrolls. Fortunes of Ali Baba is fully optimised for mobile and desktop platforms and is now available at Play'n GO-powered casinos.

“The story of Ali Baba is well-known and enjoyed by people all over the world. We wanted to take the most exciting elements of the story to create a fun game that people could enjoy playing as well as experiencing the most exciting parts of a well-loved s