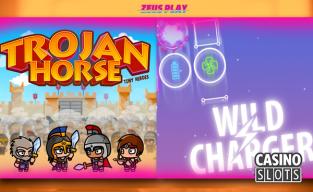 Two new slots have been launched by Zeusplay, the Greek games developer behind such hits as Amun's Book and Infinium. Trojan Horse and Wild Charger are now live at online and mobile sites that carry this innovative range.

Perhaps their local knowledge helped in the creation of Trojan Horse, a game based around a famous war in ancient Greece. Or perhaps not, as the game features cartoon characters and their toy horse in a fun setting that's sure to raise a smile. It's a 5-reel game with 10 paylines and symbols such as spears, helmets, and warriors who shout insults at each other across the screen.

The horse is a valuable wild symbol, completing combinations by substituting for others, while also worth up to 200x the total stake. This multi-talented symbol also launched 10 free spins when landing in any 3 or more places at once. During the free games feature, a randomly selected symbol will expand across any reel it lands on, boosting players' chances of collecting some big wins.

Wild Charger is themed around an electrical circuit diagram, which is an unusual, but energising topic for slots games. Batteries, light bulbs, electric fans, and connector lines appear over 5 reels and 10 lines. Landing the battery right across a payline charges up bankrolls by 40x the bet.

Players should look out for a pink Thunder symbol as it's a wild icon. Any appearance of the wild launches a respin of the reels, where the triggering symbol stays locked in place. If this leads to a new win, the wild expands across to other reels for more respins. This carries on until no new winning spins, or until the reels fill with wilds. Anyone filling reels 2 to 5 will see a colossal Thunder symbol fill the reels, for some vast payouts.