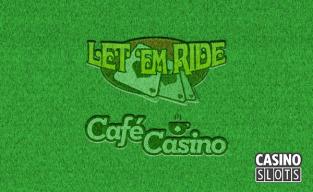 Whenever you hear about a big win at an online casino, it's almost always for online slots. For better or for worse, they make up the majority of the games at virtually every casino in the world, online or offline. They also have payout schedules designed to give a slim chance for a major win. The latest payoff at Cafe Casino is atypical in that it was a seven-figure win that came thanks to a classic table game.

This big win came on the Let Em Ride table game. The lucky winner was a player named Jason from Wisconsin, USA, and it took some high stakes play to get there. He played a hand for the table maximum of $500 and kept both raises in play for a total of $1,500 in on the hand. He nailed a royal flush, which has a 1,000x jackpot payout on your total bet, and that comes to a whooping $1.5 million. It's an absolutely enormous payout, and this player became a millionaire with correct play in this strategic game.

The Strategy Behind Let Em Ride

Let Em Ride is a game that plays much like a cross between a table game and video poker. Players start out with an ante bet to be dealt three cards. They are then able to decide if they want to raise, which involves putting in another bet the same size as their ante. A fourth card is dealt, and the player has another opportunity to raise. Regardless of whether either of the previous streets were raised, a fifth card is dealt, and then the player is paid according to the multiplier shown on a pay table, which looks much like the pay tables available in video poker.

Cafe Casino has a lot of different table games, and Let Em Ride is just one of those. It's a great opportunity for players to put some strategy to use, and as this lucky player found out, it also gives you a chance to run up some serious winnings.