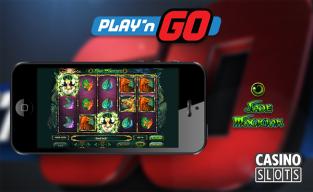 With 2017 here, every software company out there is trying to take whatever momentum they had in 2016 and continue it with new releases and other announcements. Play N Go has released their first new game of 2017, and it comes in the form of Jade Magician. This game has 15 paylines across five reels with three rows of symbols, and it has a set of features that are all driven towards exciting and fast-paced gameplay.

The first feature to look at is the wild multiplier. The wilds show up on the middle reel only, but whenever you make a winning combination that includes at least one of them, then you get a 2x multiplier on the total value of your win. On top of that, you can make a set of free spins show up if you get three or more of the scattered Jade Magician symbol on the reels as well. A valuable second chance feature gives you a re-spin for the scatters if you get just two on the reels as well, so you'll pick up free spins more often in this game than you normally would in similar titles.

The biggest prizes in this game are 2,000x, 1,000x and 500x, and those are for the top three symbols in the game when you get five of a kind. This is a pretty balanced set of top wins, and it contributes to a moderate overall volatility. This is a solid, balanced set of payouts on the top end, and there are plenty of ways to win small and medium pays as well.

Play N Go's titles are available anywhere the Microgaming Quickfire platform is used, and they produce some pretty high-quality games. They combine good graphics and fun motifs and solid gameplay to deliver a balanced experience to players. This is the case with the Jade Magician slot and how it has been given a set of features that guarantees a lot of action.