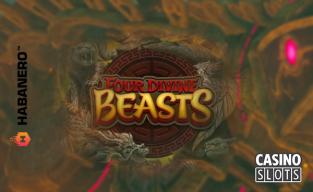 Four Divine Beasts is a stunning new slot machine from Habanero that takes players on an adventure into ancient mythology, while awarding them with a series of magical bonus features.

The 5 reels are contained within a stone-effect surround and players will see a range of exotic background locations as they move through the various features of the game. Along with the playing card symbols, Four Divine Beasts has high-value icons of an Azure Dragon, Black Tiger, Vermillion Bird and the White Tiger which are all presented in amazing detail, while also acting as the triggers for their own feature rounds.

Depending on which free spins round has been awarded, players could be treated to firey wild symbols taking over the reels, or expanded wild trees sprouting up throughout the games, while waves can wash horizontally across the game to land extra winning lines, or they could even see wandering wild symbols that move around with each bonus spin.

Progressive jackpots are also waiting to be claimed in this visually-impressive slot machine that has a medium volatility and can be played across desktop and mobile platforms at the many online casinos that feature the Habanero range. It's due for release in the week commencing 29th January, so punters won't have long to wait until they can go on this adventure.

Four Divine Beasts is sure to appeal to those who are looking for something quite different, summoning beasts who used to rule the Earth. Its mythical design is built to bring an authentic Asian feel to players whichever device they choose to play on.