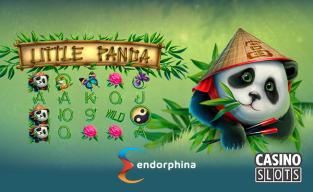 A lot of different online casino software developers have started off 2018 in a strong way with a big new release, and Endorphina has joined those ranks by releasing the new Little Panda video slot. The visual appeal of this game is tremendous, and you'll find bamboo, butterflies, tree frogs and more on the reels as you try to hit winning combination in a foggy bamboo jungle setting.

The standard bet size for this game is 40 coins, but you have some other options to adjust how much you're actually wagering per spin. To begin with, you can pick out coins that go from $0.01 to $1 apiece. However, you can also multiply your base wager by a factor of up to 10, so you can actually play for between $0.40 and $40 per turn. It's a very wide selection of available bet sizes that allows for a flexible approach to how much you decide to play for.

Since this game uses the 1,024-ways format with five reels and four rows, you'll have a ton of action and a high hit-rate as well.

The Most Important Symbols and Features

The wild symbol is just the word "wild" spelled out in bamboo letters, and it shows up on the middle three reels. With this game's format, the wilds are pretty important and very valuable, but they will not substitute for the yin-yang scatter symbol.

The yin-yang scatter can give you a payout of up to 800x, which is the largest win you can get in this slot. However, three or more will also give you access to the free spins bonus feature.

You can win between eight and 20 free spins. However, these are a bit more valuable than you might initially think for two reasons. First, you can re-trigger the feature with just two scatters on the screen (for an additional five free spins. Additionally, each wild that appears on the middle three reels will give you a win multipliers of 2x or 3x for that particular spin.

Overall, there are fun animals and a ton of action on the reels in this game, and there's definitely something to be said about the Little Panda slot's graphics as well.