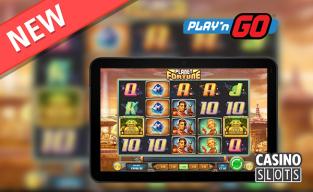 Planet Fortune is a brand new online slot maxhine from Play 'n GO that has 5 reels, 40 fixed paylines and a classic science fiction theme, where dashing heroes with ray-guns and glamourous space-girls create some of the biggest winnings.

Set in a futuristic ity, on a far-off planet, the game has been inspired by Flash Gordon, and sci-fi comics from the 1950's, giving it a distinctive style and appeal.

These valuable symbols are joined by playinf card icons 10 through to A, each surrounded by orbiting moons and planets. A Wild Robot character is able to substitute for any symbol if it can then complete a winning line and this rewarding robot is also the trigger to a special free spins bonus round when he stops in any three or more places at once, even if he doesn't complete any combinations in the spin.

In the 10 Robot Revolution free spins the Robot becomes a sticky wild, with the triggering symnols, and any more that appear, moving one reel to the left in each bonus game, Players are also able to get some stellar wins in the Magnetic Mayhem feature, which sees two or three reels locking together and where giant-sized 2x2 or 3x3 symbols can appear for some sky-high payouts.

Although the Fortune Planet is set in the far future, punters won't have to wait long before they can spin these retro-style reels, as the game is released on 25th January, 2018