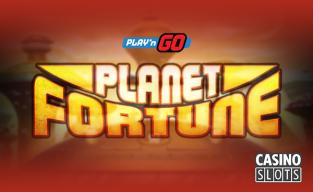 If you're the type of person who wonders if we're ever going to have to do battle against machines, then you're in luck with Play'n Go's newest title. The Planet Fortune slot is about a futuristic space city where robots have started going haywire, and now you have to try to stop them on the reels.

Bottom line, this is a 40-payline video slot with five reels and three rows. The game mechanics are all about the robot wild symbols, of which there are good and evil robots. When you get at least three of these wilds on the reels at once, you'll also trigger the free spins bonus feature, which incorporates the wilds as a key feature. Every single wild on the reels during this feature, including the ones that start the feature off to begin with, will become a part of the feature. They will stay in place for the next spin, moving one reel to the left until they fall off of the reels. The free spins continue indefinitely until there are no more wilds on the screen.

The Magnetic Mayhem feature can be triggered as well, and it comes up randomly on any given spin. This will have at least two reels stick together side-by-side to show the exact same symbols, which drastically increases your chances of hitting winning combinations. This is a fun feature, especially when you catch a wild on it, because that can lead to several different payouts on the same spin. That's the type of feature we like to see in games, and it's exactly the kind of thing you need to make a game super exciting.

The pace that Play'n Go is looking to make this year is clear. They want to be wide-open and show the rest of the industry that they're going to have to keep up if they want to be on the same playing field. This is the level of competition that we like to see because it creates and upward pressure to give players better and better experiences, and they are definitely one of the companies leading the way with games like Planet Fortune.

Press Release, Play'n Go back to the future with Planet Fortune news.cision.com, January 25, 2017