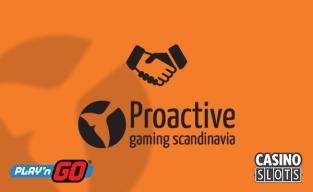 Business deals where one company buys out another are a part of the online gambling world just as much as they are a part of any other business. Recently, Play'n Go has made one such deal where they purchased the company Proactive Gaming Scandinavia. This is a purchase with a number of key strategic points that will be sure to help Play'n Go a tremendous amount with expansion into specific areas.

There are several key things that they're getting from this deal. First, they're getting their portfolio of titles to add to their own platform, which is an important point. However, it's not the only point, and they're also getting access to running online poker for the first time. Poker has been one sector in the online gambling world that has been falling overall, but there are still a number of players out there who are looking to play it, and this will allow them to facilitate that.

Other advantages to this deal include getting the technical team from Proactive Gaming, which is extremely experienced, and they will also get their contracts with PAF and other regulated jurisdictions, which will allow them to get their titles in front of more existing players. This is a critical point because it's not always easy to get into these jurisdictions because of the limited number of licenses that are granted and other requirements, so this type of purchase is often needed for expansion into certain markets. Overall, it's easy to see how they're getting a lot out of this and that it will definitely be something that pays off for them over the long run.

Play'n Go makes excellent online slots, and that's probably what they're best known for at this point in the game. However, they also have an aggressive strategy that has allowed them to get those games in front of a wider range of players, and that's another reason for their popularity and success. They always build their games in HTML5 as well, which has helped them to stay mobile-friendly and to work on a really wide range of devices. With more of the industry switching over to the mobile sector, it's easy to see how this has helped them in a major way.