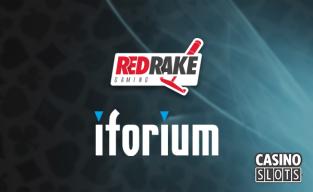 Getting games in front of players is one of the most important things that a software developer can do in terms of business strategy. You can have tremendous games that you have created, but you'll have a hard time staying in business if no one ever sees them or plays them. Red Rake Gaming doesn't have that problem because they have made lots of great deals to get their titles in front of people, and that's the case once again with their new deal with Iforium.

What This Deal Includes

The new deal with Iforium will put Red Rake Gaming's entire portfolio on the former's Gameflex aggregation platform. This platform combines titles from several different software providers to create a strong, cohesive platform for players. More than 40 games are a part of this deal, and that will include future titles as well. It's an exciting time for players and both of the companies involved, and it seems like it's very much a win-win situation all around.

The Power Behind This Deal

Iforium is a company that has a lot going for it, and they have one of the better overall online casino platforms available in today's market. They received the EGR B2B IT Supplier of the Year Award back in 2015, and they've picked up other awards along the way as well. They have an excellent selection of titles, and that's been made even more the case by bringing on the full portfolio from Red Rake. This is the type of deal that has helped them to accumulate more than 5,000 games total for their platform.

Red Rake Gaming produces some very high-quality online slots, but they also have a number of other games like video bingo titles. They are licensed in several regulated markets, and they're pushing to expand even further with more licenses (including that for the United Kingdom) this year. This company has definitely started off 2018 in a strong way with this new distribution deal, and it shows that they aren't waiting when it comes to expansion as a part of their overall business strategy. This is the type of thing that has been getting them noticed more and more over time, and it's why we believe they will continue doing well this year.