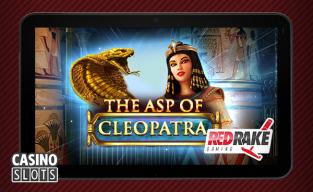 The Asp of Cleopatra slot has been released by Red Rake Gaming, and it's a great example of what they're able to bring to the table as we close the books on 2017 and move into 2018. Anytime a software developer makes a game based on a theme that has been used a lot in the online slots world, there's a lot of pressure for it to stand out from the crowd. If it doesn't, then it'll become buried under all of the other titles with more original motifs. Red Rake was able to make this slot stand out in a big way with strong graphics and a wide range of features.

There are so many individual features that we can't cover them all here, but we will show you what the basic set of features is like. Whenever you log on to play this slot, you'll see a large snake on the left-hand side of the reels that is coiled up vertically to create a free spins meter. It has the numbers 0, 0, 0, 10, 20, 30 and 50 on it, and that is the basis for the free spins bonus feature. This is The Asp of Cleopatra from the title of the game, and it's the key feature that drives most of the gameplay. However, it's far from the only feature.

You earn free spins on this asp by activating the re-spin feature. You get re-spins whenever you hit a winning combination. If you're able to get four re-spins in a single turn, then you'll be up to the 10 free spin mark on the asp. More free spins can be won during the free spins mode, and it maxes out at 1,000 free spins at a time.

This software company has shown that they aren't playing around with such a strong release right at the turn of the year. It has excellent graphics, much better than most in the Egyptian sub-genre, and the gameplay is based on an idea that we can't remember having seen before. Overall, they've definitely brought a fun experience to life with this slot, and we expect players to love it.