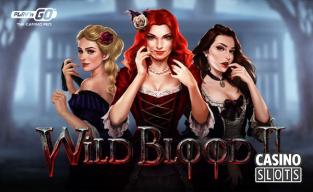 Wild Blood II is the sequel to a popular vampire-themed slot from Play'n GO, which looks set to repeat the success when it's launched on January 23rd, 2020.

A Game With Added Bite

The upgraded graphics and enhanced gameplay sees the action unfold across 6 reels, where symbols line up over 4 rows. It gives players 4,096 different ways to win, as they match symbols across adjacent reels from left to right.

It's set in the Deep South, with a dark forest providing a creepy backdrop to the main game. Alongside metal-effect playing card symbols, the Wild Blood II slot features skulls, vials of blood, and daggers. Dracula himself is a dashing character, and 3 unfortunate Southern belles have fallen for his charms.

Dracula is a wild symbol who can fill whole reels at a time. If he's seen on reel 6 to the right side, he moves across to the left reel and locks in place as the others respin for free in the Vampire Bat Re[ins feature.

Any 3 or more vial scatter symbols trigger between 10 and 25 the Bloodlust Free Spins, depending on how many symbols appeared at once.

Players meet Laura, Margaret and Rebecca, choosing from these victims of the vampire to launch different bonus games. Laura oversees games where wild symbols expand up or down to fill more of a reel. During Margaret's games, players collect 4 or more wilds to earn win multipliers and extra spins. Wins can multiply by up to 5x in this round.

If they select Rebecca, wild symbols carry multipliers of between 2x and 3x, while combining multipliers can boost wins by up to 81x! More scatters add extra spins to Laura's and Rebecca's free games features. The Vampire Bat feature can trigger during the free games, with the added benefit the corresponding victim symbols will turn into further wilds for the respin.

Play from 23rd January 2020 at online and mobile casinos that carry the Play'n GO range.

“Wild Blood was a very popular title for us, and we felt the time was right to give these characters another outing. But we also wanted to ensure that we gave a new gaming experience, not just repeating the same game over again.''