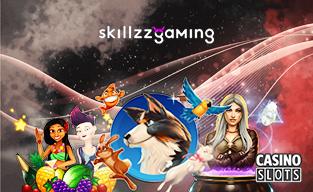 Games of Skill From Skillzzgaming

The MATCH-3 range kicks off with the introduction of Fruit Blast and Pets Go Wild, which have already become popular with players. Winning from these games isn't just down to random luck, as the decisions made by players can influence the outcomes.

New rounds and content are unlocked as the games progress, encouraging customers to stay online for longer. At each stage, customers could activate mini-games, extra bonuses, and new winning potential.

In the near future, Skillgaming is set to launch their latest title on the Microgaming platform. Alchemy Blast is set in a lab, where players are tasked with brewing new and exotic potions to discover the hidden secret to turning wagers into virtual gold.

Founded in 2015, Skillzzgaming now has 6 titles on the market, at multiple casino sites. Each game is licensed in several regulated markets and distributed by some of the top operators in the business.

Players are already looking forward to the launch of Alchemy Blast, where they have the chance to concoct some winning potions.