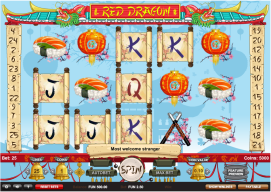 Dragons have shown up in a lot of different cultures in a lot of different forms, so it's kind of interesting to think about what might have spawned these legends in cultures that were so far apart and so disconnected from each other thousands of years ago. Whether these tales are coincidence, or whether they're based on creatures that actually existed, they make for great entertainment, and 1x2gaming is showing how much they understand that with their new Red Dragon online slot release.

Red Dragon immediately stands out for having a style that's atypical for today's games. First off, it uses a theme based on Ancient China, and this includes dragons, Chinese lamps and tons of other symbols of the era. However, it also uses traditional slot machine sound effects along with a soothing Ancient China-themed soundtrack, and this creates an interesting feel that can't really be matched by any other games out there today. It's this feel that makes Red Dragon stand out in a tremendous way.

On a basic level, this game uses a five-reel format with three rows and 25 paylines. However, you'll find that it has a medium volatility with symbols that are close in value instead of having certain symbols that pay out drastically more than all of the others. You'll also get two shots at bonus features. One is a standard bonus game with payouts that vary based on your bet size, but the other is a free spins bonus feature. It's important to point out that all wins are paid left to right in this game except for the scatter symbols.

While not as well-known as some of their competitors, 1x2gaming has been slowly but surely carving out a place for itself in the online casino software space. They've been putting their own spin on popular themes and concepts for online slots, but they don't go so far as to reinvent the wheel. Instead, they stay inside the context of what players are comfortable with in terms of game format and layout, and this prevents situations like what other software providers find themselves in with being too smart for their own good. Because their games come across as high-quality instead of trying to be too clever for the sake of being clever, they've been quickly finding a following in online slot fans.