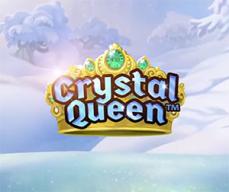 The upcoming Crystal Queen online slot by Quickspin is looking like it could be one of the hottest new slot releases of the summer. It's based on a five-reel format with the normal game using three reels. However, with its special swooping reels feature, you could end up playing across six different reels at the same time. Because the number of rows can change, so can the number of paylines, but you'll start with 20 ways to win with the ability to win on up to 56 total paylines with the swooping reels.

The main feature that the Crystal Queen game is built around is called swooping reels. The way this works is that when you get a winning combination, you are paid your win, and then the symbols disappear to let new symbols drop into their place. However, another row is also added to give you more ways to win, and your multiplier goes up on your wins for what amounts to a free re-spin. You can win multiple times in a row in this way for consecutive re-spins, and you'll end up with multipliers as high as 5x with six rows of play.

To add even more value, the free spins feature has all six rows available for all of your spins. The multipliers are still available with re-spins, but you don't have to use them to unlock the next rows. This is an excellent twist on the rolling reels/cascade feature that's been used in a number of games in the past, and it definitely sets things up in a way that would allow players to win several times on the same spin.

Something else that really adds to the value of this game, and something that you don't see a lot these days, is that you can win in both directions during both the normal game and the free spins. When you add in the fact that each win is worth so much more because of the swooping reels feature, it's easy to see that this is a value-packed game with a ton of options for hitting major wins. With tons of winning combinations available and the ability to score several of them on the same spin, players are going to run up some big payoffs with Crystal Queen.