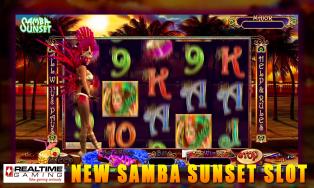 The newest slots are always the ones that have the attention of the most players because of the simple fact of the matter that these games are what most commonly push the cutting edge of what's available in the genre. Realtime Gaming has been known for making some pretty good games over the past couple of years, so players get excited for their games as well. Their newest release is Samba Sunset, a game that will give players plenty to get excited about.

The Format of Samba Sunset

With five reels, three rows and the use of the all-ways format, there are 243 ways to win on each spin with this game. That lends itself to a high hit-rate and a low volatility initially, but that doesn't mean there aren't ways to win significant amounts of money. With wild symbols that show up on the second and fourth reels, you'll have plenty of extra chances to hit winning combinations that you wouldn't have scored otherwise. What's more is that the Rio-inspired slot's wild symbols also substitute for the scatter symbols, making it much easier to get into the bonus features.

Thre or more of the scatters will get you 10 free spins. These free spins give you extra high-ranking symbols (like the Dancer) on the reels, and it also means that the wild symbols become 2x wild multipliers. Three or more scatters during the free spins gives you a set of five extra super games with even better chances to win.

Realtime Gaming hasn't always had the best reputation for game quality. In fact, up until a few years ago, they were seen as having massively fell behind companies like BetSoft and Net Entertainment who were really killing it in the quality department. However, RTG has turned things around in a major way, and a number of their titles over the past couple of years have been up there in quality with the best names in the industry. Samba Sunset is slated to be a pretty interesting release when it comes out on July 6, and players will be able to samba into the sunset with chances to take down some big wins.