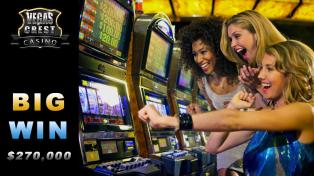 Progressive jackpots represent the largest wins available in the online slots industry, and a player who goes by the screen name of "Holyroller" found this out from first-hand experience at Vegas Crest Casino recently. This lucky winner was able to take down a massive, six-figure jackpot on the Legends of Avalon progressive video slot in what's being seen as one of the largest slot wins of the summer so far.

Details on This Jackpot

The win itself was worth $272,135.90. It came on the progressive jackpot for the video slot Legend of Avalon at Vegas Crest Casino. It's important because it's the largest win to ever come out of this particular online casino, which is interesting because it's also the second six-figure jackpot for them inside of the past couple of months. This could mean things are only heating up for Vegas Crest, and we wouldn't be surprised if we see another big winner come from there sooner rather than later.

This online casino has over 370 games to choose from, many of which are slots, and they've built up a bigger base of players than they've ever had before. Along these lines and with this level of growth, it's not hard to see why they're seeing more big jackpot winners now than they've seen at any point leading up to this summer. They're getting the perfect storm of a lot of great games and a ton of players to really kick jackpot season into overdrive.

If you aren't an online slots fan, it can be easy to understate the importance of massive progressive jackpots like the $272,135.90 one that Holyroller was able to pull. These payouts represent life-changing sums of money, and they're often the main reason that a lot of players get in on the action to begin with. They're very real for the players who have won them, and it just goes to show that anyone could be a winner at any stakes if they play the right games. Since these titles don't normally require high stakes bets to win high stakes prize, it's easy to understand why they are so popular, especially among penny players.