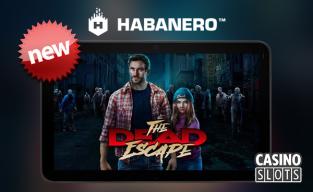 There are many online slots based on what would be considered horror themes, and zombie invasion games are no exception. Habanero Systems has joined the pack to a certain extent with their new The Dead Escape slot. The idea behind this game is that you're trying to escape an invasion of zombies, and you have to fight them off the best way that you know how. It's a feature-packed game with solid graphics and a lot of excitement.

Fight a Zombie and Win

There are two human characters in this game: a man and his daughter. If either line up directly to the left or right of a zombie symbol, then they will have a duel. Winning the duel will see the wild zombie symbol expand to cover the whole reel. However, losing the duel will turn the human into a zombie, which means there's another wild on the reels. You essentially win either way, but you win differently depending on how the fight plays out.

If you can get three or more of the scattered truck symbol (which also pays the largest win in the game), then you will get a set of free spins. During these free spins, you can pick up jugs of fuel for the truck to get extra free turns added on, and you get an extra free spin for each one of them you find. This means it's easy to extend your bonus feature and run up even bigger winnings. What's more is that the free spins feature has wilds on every reels instead of only the first, third and fifth, which means more winning combinations for you.

Habanero Systems is known for producing great online slots. They have built games in a variety of different genres, and while they tend to put different visual styles in different games so that they match up with the themes and concepts used, they always bring a strong aesthetic to what they produce. When you add this to super-solid gameplay whether you're inside of a bonus feature or in the normal play mode, you have a winning combination that players have shown over and over again that they absolutely love.