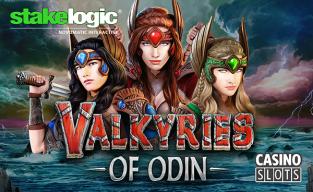 StakeLogic has announced that they will be releasing a new game soon by the name of Valkyries of Odin. This game has a female-centric theme based around Norse mythology. The Valkyries were servants of the gods who had power similar to them but who were bound to do the will of those who were over them. They have been captured in this game with awesome graphics and a great set of features.

This new video slot has a lot of features that tie into the story and the characters in it. For example, you'll get a chance at a free spins bonus feature along with huge wild symbols that cover entire reels. Players can also win in both directions on all of the paylines, and that creates a situation where players can get twice the wins than they would normally. There's a high hit-rate implied here, and with the value that it seems they have tied up in the numerous bonus features, it's a good thing to include to create some balance in the pay table.

One of the reasons that Greek, Roman and Norse mythology are used so often as the themes of slots is that they are very rich in different themes and concepts that can be used as the bases for games. They offer a lot of depth, and you're seeing that with Valkyries of Odin in that you have a set of characters that haven't ever really been used in a slot before with this type of focus, and the entire experience is based around them.

StakeLogic is known for creating some pretty high-quality online slots, but they're also known for using themes and concepts that make their games stand out. We're seeing this with their upcoming release, but we've also seen it with the games they have released in the past. They are a great example of a company that is pushing the envelope by exploring different spins on theme instead of just rehashing the same old thing over and over. However, they've also shown that they don't need a movie, television show, video game or comic book as a theme for their games to keep players interested, and that's a big deal as well.