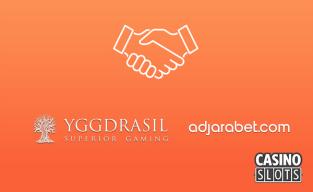 Expansion into new, emerging markets is an extremely important part of the current state of the online gambling industry. Companies are put into a position of trying to gain footholds and more countries decide to regulate the industry, and these initial steps will more than likely form the foundation of a strong showing in those countries over time.

Yggdrasil recently cemented a deal that will be their first expansion into Georgia with a content distribution deal with Adjarabet, the largest operator in the country.

What is Included in This Deal

A number of things are included in this deal, and it's not just games. While Adjarabet will definitely benefit from the influx of high-quality titles, they will also be getting a number of different promotional tools from Yggdrasil, including their BRAG social media sharing platform, BOOST and Missions. These tools combine with the fact that they make such high-quality games to help fill out the overall experience for players.

Georgia is an emerging market in the sense that they haven't been regulating the online gambling industry for all that long, so right now is the time for software companies to try to get in and gain a foothold. The more they can make their games familiar to the players there early on, the more they will be seen as the standard to which all others have to be compared to, and that's a very favorable position to be in. If you're the type of player who loves great slots and you're from Georgia, then you've got to be happy about this news.

There are basically three parts that we have seen to Yggdrasil Gaming's overall strategy when it comes to the online gambling world as a whole. First, they put out a tremendous product full of games that are in the upper tier of what's available. Second, they have great promotional tools that go above and beyond what the majority of the rest of the industry is doing right now. Third, they're aggressive about getting their foot in the door in emerging markets, generally working with the biggest operators available. That's what is leading them to success in Georgia, and it's a formula that they have repeated a number of times.