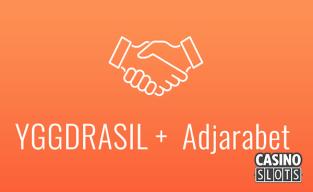 Last week, a renowned supplier of online casino games, Yggdrasil Gaming, announced that a deal has been made with the country of Georgia's largest online operator, Adjarabet. This agreement will bring Yggdrasil's game library as well as their award-winning promotional tools into the country's jurisdiction for the first time ever, marking a new era of potential growth for the company.

In his official statement, Fredrik Elmqvist, the CEO of Yggdrasil, said that, "This is a significant moment in Yggdrasil’s growth, with our first entry into the fast-growing Georgian market. Georgia is an exciting market where Yggdrasil sees strong growth potential, so we are thrilled to have partnered with such a successful operator." Elmqvist went on to praise Adjarabet and its extensive customer base.

Adjarabet shares in Elmqvist's enthusiasm, with the Head of Casino, Tom Hutchinson, saying that they are " particularly excited to make use of Yggdrasil’s range of in-game promotional tools, which have never before been deployed in Georgia."

Currently, Adjarabet is the number one operator in Georgia, and signing with Yggdrasil is a move to help them maintain that top spot in the industry.

Yggdrasil Gaming has quickly become one of the most innovative and respected names in the online casino industry. The company's headquarters is in Malta, and they hold licenses in Malta, Romania, Gibraltar and the United Kingdom. They have recently been working towards expanding their international presence even further by partnering with an Italian operator in March.

The firm consistently creates award-winning games with stunning graphics and interesting, exciting gameplay. They have won such prestigious awards as the 2017 Innovator of the Year at the International Gaming Awards, and Slot Provider of the Year for both 2016 and 2017 at the EGR B2B Awards.

Yggdrasil utilizes the revolutionary iSENSE 2.0 HTML framework to offer customers the best, most cutting edge features, including simultaneous desktop and mobile launches. In addition, they have made a name for themselves with BOOST™, the name given to their unique set of promotional tools. These tools allow the company to increase engagement and player retention by promoting games through various social media outlets.