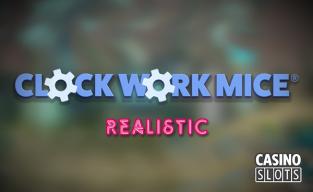 Clockwork Mice is the name of the latest slot from Realistic Games, and it's no wind-up, as it comes with robotic rodents who can trigger a free spins round where winnings are multiplied several times over.

Clocking In To Clockwork Mice

This 5-reel slot game is crossed by 20 paylines and is set against the backdrop of a futuristic mouse city. The transparent reels are filled with playing card symbols, flying transporters and images of the city at night, with up to 40x the total bet paid out when the high-paying icons land across a line. The game logo is worth up to 250x the triggering bet, but the highlight of this game is a free spins bonus round that gets triggered by any 3 or more scatter symbols appearing in a single spin.

Players are awarded 12, 24, or 48 free games when 3, 4, or 5 scatter symbols land. During these spins, a special Multiplier Clock will appear after each win, boosting the value of the win by whatever number the hands of the clock stop on. Once a multiplier value has been paid out, that number is removed from the clock and players who manage to remove all numbers before the free spins end will get a big bonus payout at the end.

The free spins can be retiggered, with a maximum of 96 bonus games possible.

Play On All Devices

Clockwork Mice is developed in HTML5 and can be played across all mobile and desktop platforms. Players can stake from just 0.20 per spin, right up to 200.00 and collect high returns at all bet levels. It's the third release in just a few weeks from Realistic Games, whose Black Ice and Slot It In! games have already made a big impression since May.

Clockwork Mice not only has the great maths model that players have come to expect from Realistic, but also has a different look and feel to the game that will appeal to markets around the world.

'' Blast off into the futuristic world of Clockwork Mice'' www.realisticgames.com July 2nd, 2018