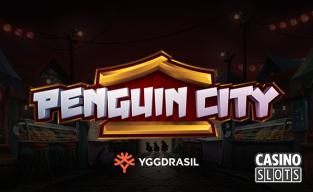 Penguin City is the latest slot from Yggdrasil Gaming. It's set in a Far Eastern land, populated entirely by penguins. The five reels and a Win All Ways format bring prizes to players when matching items of Asian food land across the game. Wild symbols and a unique Penguin Escape feature bring the cartoon antics to life, as hapless birds try to escape an evil Emperor.

The Game In Black And White

While small-value wins are created by playing card suit symbols landing on adjacent reels from either the left or right side, higher payouts are claimed when bowls of rice, boxes of noodles, soy sauce and other tasty treats are seen. Whenever the wild symbol appears and completes a winning combination, it stays locked in place and the Penguin Escape mode is triggered.

This special feature is beautifully animated and sees penguins bouncing across the reels as they try to escape the Emperor. The reels spin, with the wild symbol remaining locked in place, with one penguin jumping across on each spin. If it fails to escape, but the respin is another winner, the feature continues. A successful escape adds another sticky wild to the reels in a winning spin, or a guaranteed winning coombination of symbols if the spin wasn't a winner.

The escape continues until there's an unsucessful escape bid in a non-winning spin. To help extend the feature, the Emperor becomes an expanding wild symbol on the middle reel, which makes it easier to complete combinations.

This slot is built on the proprietary iSENSE2.0+ software, which gives seamless gameplay on desktop and mobile platforms. Penguin City comes with the BOOST in-game promotional tool and the BRAG system which makes it easy for players to share their sucesses on social media.

Penguin City has been a great opportunity for our development team to produce a really fun, light-hearted game packed full of features and a rich user experience.