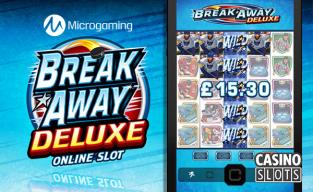 Break Away Deluxe skates into online and mobile casino sites that use Microgaming software. This Ice Hockey themed game features stacked wild symbols, free games with multipliers and a rolling reels system that can lead to several wins in a row.

Take to the Rink

Break Away Deluxe is a sequel to a phenomenally popular slot. It's been developed exclusively for Microgaming by Stormcraft Studios, the company behind hits such as Dragon Shard and Agent Jane Blond Returns.

The game plays out on a 5x5 grid of Ice Skating related symbols. Players will discover umpires, ice-making trucks, skates and the arena on the reels. It uses a rolling reels system, which sees any winning symbols disappearing, to be replaced by new ones dropping down from above. This can lead to new inning sequences, which sets the reels rolling again.

Players can pick from 18, 36, 68, or 88 paylines, with greater winning potential with more lines activated.

Super stacked wild symbols can act as others to complete combinations. A special Smashing Wild symbol will turn random reels fully wild if it can then guarantee a win.

The chilled gameplay of this icy game heats up when 3 or more scatter symbols appear at once. 12 free spins play out and during the round, any sequence of rolling reels will pay out rising win multipliers. This can reach a maximum of 8x the base rate. On top of this, during the free games, Growing Wilds will gradually expand across reels, to give players yet another boost to their odds of claiming a win.

Break Away Deluxe is available to play with stakes of between 0.18 to 44.00 per spin. It's mobile optimised, so can be played across desktop, iOS, and Android platforms. The game will be exclusive to Microgaming operators from Tuesday 23rd July.

“Break Away Deluxe takes all the action of the phenomenally popular original slot, layering it up with even more exciting and rewarding features. Stormcraft Studios have successfully created a high volatility slot experience, with excellent win potential