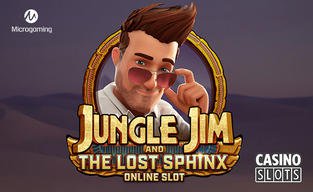 Ever since the Jungle Jim slot was launched by Microgaming in 2016, it's been one of the top attractions at online and mobile casinos that use this huge range.

A sequel has just been announced, with Jungle Jim and the Lost Sphinx set to hit casinos in November 2019.

Little is known about this upcoming slot machine. What we know so far is that it's been developed by Stromcraft Studio exclusively for Microgaming. It's a 5-reel, 50-line game that will feature the high-end graphics of the original and is sure to be packed with bonus rounds.

To launch Jungle Jim and the Lost Sphinx, the Microgaming stand at iGB Live1 was decorated with game branding. Attendees were able to view previews and try out demo games. Ten flavours of ice cream, each inspired by a 2019 Microgaming slot, were also provided for hungry guests.

iGB Live! ran from 17th-18th July at RAI Amsterdam. The Microgaming stand was once more a centre of attraction.

''The new game includes outstanding artwork and entertaining mechanics, including the popular Rolling Reels™ feature, and Stormcraft Studios have set a new benchmark in visual storytelling in our industry.”