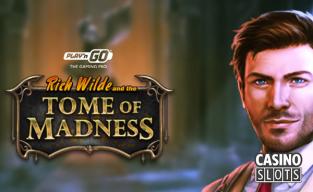 Rich Wilde and the Tome of Madness is a brand new slot from Play'n GO that continues the story of an adventure-seeking hero. The Rich Wild series already includes Pearls of India, Book of Dead and Aztec Idols games, each of which has become hugely successful at online casinos worldwide.

This latest game sees Rich Wilde solving the riddles of the Cult of Cthulhu. It takes place within a Gothic mansion, lit up by a raging thunderstorm. Rich Wilde stands to the side of the reels, watching as symbols of gemstones, daggers, rings and pendants appear.

The adventure takes place over a 5x5 symbol matrix, with winning combinations created when players land 4 or more matching symbols adjacent to each other horizontally and/or vertically. Winning symbols are removed from the reels, leaving spaces for new one to drop in to, which can create new combinations, This cascading reels feature carries on until no new wins are landed.

If a win lands on any of the special Eye Mark spots on the reels, extra wild symbols are added to the game. Rich himself is a wild multiplier symbol who doubles the value of any cluster that he helps to complete.

A monstrous eye, surrounded by tentacles, is a Mega Wild, which fills several places on the reels, and moves down the grid to create more winning chances.

Once players have landed a total of 42 symbols in clusters, a Portal opens and takes them to the Other World free spins round. The games carry on, with special wild features playing out in every spin, until all features have been awarded. During the free games, every time a win lands on an Eye Mark, it summons the Mega Wild creature from its mysterious dimension.

Go Wilde For This Game Online

Riche Wild and the Tome of Madness can be played for stakes of between 0.50 and 100.00 per spin at some of the top online and mobile compatible casino sites. The rich design and impressive features are hallmarks of Play'n GO and this slot joins an impressive collection from the company that includes recently-launched games like Game of Gladiators and Mahjong 88.

“Of course, it was always in the plans to bring back a character as popular as Rich Wilde, players love him and his games, so it was just a case of finding the right adventure for him to go on. With our ambitions for 2019, we also felt now was a good time

Source - Riche Wild is back for another adventure www.playngo.com/news 1st July 2019