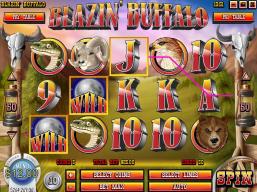 Rival Gaming has recently released a new 5 reel and 50 pay lines video slot in the form of their Blazin’ Buffalo game.

The game is themed around an impressive American Bison; however, this isn’t the only animal you will find in the game, as it also features symbols of; Wolves, Bears, Rams, Snakes, Money Sacks, a Full Moon and some Letter and Number symbols.

It is a well designed game, but we know it is the features that you really want to hear about.  These include; Multipliers, a Wild symbol, a free spins round with flaming Wild reels and a bonus round based upon Three Card Monte.

You will be able to play the game for yourself at a range of Rival powered online casino sites.