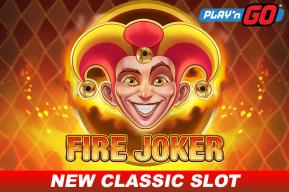 In the online slots industry, new releases are a key part of any developer's ability to stay relevant and fresh in the minds of the players. Play N Go knows how to do that with a regular schedule of new games, and the new Fire Joker online slot is an excellent example of that. They've really targeted an audience who wants a simpler experienced based on solid gameplay with this title, and that's a niche that's gotten a lot of attention lately from a wide range of different software providers.

This slot is a three-reel, three-row and five-payline experience. It has a graphical set that's bright, vibrant and relatively simple, which is characteristic of Play N Go when it comes to their classic slot titles. These games tend to focus more on gameplay than top-tier graphics because it's a bit more about substance than flash. It's a very feature-packed experience that will give players a lot of excitement even inside of short sessions.

Here is a general idea of the features available in this game. If you get matching symbols on two reels wihout a win, then you'll get an automatic free re-spin of the reel that didn't match for a free chance to pick up a payout. You'll also have a chance to get a big multiplier on your win worth anywhere from 2x to 10x if you fill all nine spots with the same symbol. The wild joker symbol substitutes for anything in this game as well, and he shows up on all three reels with an 80x prize waiting for you if you get three of a kind. The 25x win for three of the lucky red 7 symbol is also solid.

Play N Go has seen quite a bit of growth in 2016 so far, and we expect the last six months of the year to be more of the same. It's awesome to see this company doing so well because of the high-quality content they're putting out, and the voice of the players voting with the time they put into playing these titles is really shining through in a major way.