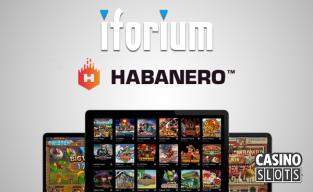 In a new deal that's sure to get them a ton of exposure, Habanero has gotten their games on the Iforium software platform. This will make their games available with a variety of operators and put them in the company of some of the biggest names in the industry. More than 50 different developers have content on this platform on some level, and there are over 5,000 total titles available.

The name of the Iforium platform they've joined is Gameflex, and it's an aggregation platform like a number of others that we have seen before. The difference is in the overwhelming number of games they have available in one place, which puts them in a position to have major advantages over plenty of the competition. Iforium is licensed in the United Kingdom, so this platform gets a ton of respect in terms of security, safety, fairness, information security, etc., as well.

Habanero has around 75 video slots that are going to be added as a part of this deal. They make some pretty high-quality games, so players will definitely be excited to see what they have to offer on the Gameflex platform. They will also be adding nine table games, but another place where they really stand out is in their selection of around 50 video poker titles. This is a pretty incredible amount, and it may be the most video poker games that a single provider has anywhere in the online arm of the casino industry.

As soon as it became standard for online casinos to use games from several different software providers,t he door for software and game aggregators was opened in the online casino world. The way this works is that a company puts together content distribution deals from several different providers to have their games in a platform, much like Iforium does with Gameflex. Then, they offer this one package to casino operators as a sort of one-stop-shop type of gaming solution. The end result is that the casino can have tons of games with less headache. In turn, they also get new content on a regular basis, especially when new distribution deals like this one with Habanero become signed.