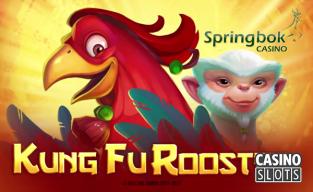 In China, this is the Year of the Rooster, and Realtime Gaming is celebrating that with their newest slot release. Kung Fu Rooster is about a cocky chicken who knows kung fu, and there will be plenty of cock fighting on all five reels with 12 paylines of action. The format is a little different, but the action is intense in this game.

About This Upcoming Game

This game will be out on July 19, 2017. It'll be available on all three platforms for players who use the downloadable client, the instant play option and the mobile app. It has great artwork with a fun soundtrack, and the Kung Fu Rooster himself is animated in a way that makes this game one of the best titles RTG has come out with from a graphical standpoint. It looks excellent, and the gameplay is strong too with a chance to get up to 25 free spins with multipliers that increase as you play for opportunities to win overwhelmingly large prizes.

An important part of this announcement is that Springbok Casino will be the first site to have the game for a while before it's released to other casinos. This is a part of their agreement with Realtime Gaming that sees their games go to them first, and that's a pretty big deal because players at Springbok will get a chance to play first. That's a pretty big incentive to play there if you're looking to get the first crack at playing new games like this one.

One of the things that Realtime Gaming used to catch a lot of criticism over back years ago was that their newest games looked like they were a decade or more old. They heard their critics and made the relevant adjustments, and now most of their new titles look pretty good. They have been getting better and better about the visual appeal of their slots, and Kung Fu Rooster has the potential to be one of the best-looking games they have released yet. This type of improvement shows that they are serious about taking over more and more of the market with high-quality games.