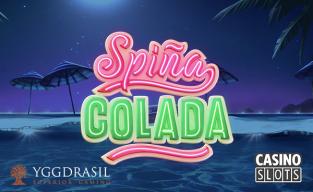 In a bit of wordplay, Yggdrasil Gaming has announced what will be their next online slot release. Coming up on June 22, 2017 will be Spina Colada. This is a game that is obviously based on the Pina Colada adult beverage, and this comes after they picked up Slot Provider of the Year at the EGR B2B awards in London for the second year in a row.

What Spina Colada Has Waiting

This slot is based around a number of features, but its structure is pretty standard with five reels, three rows and 25 paylines. You'll find yourself at a beach-themed bar in this game, and there are four random features that drive the action. You can get extra wilds, guaranteed wins, a second chance at wins and a full line of wilds. You'll collect icons as you play this game that build up to the features being triggered, so there's a lot of replay value here as well.

A big part of the success of this company has been the combination of visual and gameplay-based stylistic decisions. You see both in a major way in this game between how it looks and how it's presented along with how the gameplay is structured. The idea is to give players style and substance at the same time, and this has been the winning combination for Yggdrasil as it has picked up Slot Provider of the Year at the EGR B2B awards for the past couple of years. We suspect that they will continue pushing along in the same way for the foreseeable future as a result of their success.

This game is coming out on June 22, 2017, and that gives you time to prepare a deposit to your favorite online casino that uses software from Yggdrasil Gaming so that you can hit the reels on this game as soon as it comes out. It's looking like the Spina Colada slot will be yet another big winner from this company, and it's not that surprising considering they seem like they've found a winning formula with a combination of strong graphics, fun features and exciting gameplay.