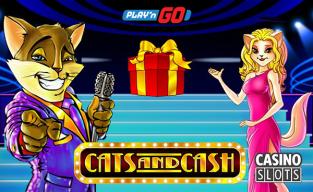 Casino players will soon be able to get their paws on a new version of the Cats and Cash slot from Play'n GO. This popular game has been converted to HTML5 format which means that it now works on mobiles and tablets computers as well as desktop PC's, with all the great features still intact.

The unique theme of Cats and Cash sees the action unfold in a gameshow, hosted by a cool cartoon cat and his beautiful assistant. A variety of other smartly-dressed cats fill the 5 reels and 15 paylines, along with a goldfish, stack of gold bars, valuable necklace and wads of cash. The goldfish is a scatter symbol who pays out some of the top prizes when he splashes around in any 3, 4, or 5 places on the reels.

The host is a wild symbol who doubles winnings whenever he helps to complete a winning combinbation, while a colourful wheel and a wrapped present are both special bonus symbols.

Cash Awards From A Wheel Of Fortune

Any time the wheel bonus symbol is seen on at least 3 reels across a payline, players are taken to a Wheel of Fortune which the assistamt spins to reveal instant prizes of up to 5000x the line bet. Players could even land an orange segment of the wheel to collect an instant prize and a second spin.

The wrapped present triggers a second feature which takes place on some steps, where a series of presents are lined up on each level. Players select a gift to claim an instant reward which can be as high as 2000x the line bet. The other values are then revealed, so hopefully the biggest prizes will have been clawed back from this round.

Play'n GO have taken the opportunity to upgrade the graphics and soundtrack in the conversion, giving players enhanced gameplay. The new look and feel is sure to keep punters coming back again and again to what was already a very popular game from this Swedish developer.