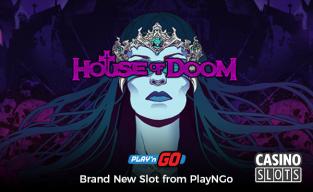 House of Doom is a horror-themed slot game from Swedish developer Play'n GO that sees a variety of scary symbols and frightening features such as free games, expanding wilds and a special Skulls of Abyss bonus round.

It's a classic layout of 5 reels and 10 paylines, with 3 or more matching symbols across any line paying out a prize. The black reels are set against a pile of skulls and each symbol is designed to fit in with the theme, including the red playing card icons in a foreboding Gothic style. These make up the lower-value winning lines, while a five-pointed star, crucifix, red rose and the Seer, with her crystal ball, will return the top prizes. She's also a wild symbol that can act as all others, apart from the scatter.

The bonus features can begin as soon as the first spin of the reels is made, as in every spin a reel is randomly highlighted and any wild symbols on it will expand, giving players a better chance of completing a winning combination.

The House of Doom logo, which sees a haunted mansion surrounded by flashes of lightning, is the scatter symbol and 3 of these in any places will open up a free spins round. During these Doom Spins, the scatter symbol becomes a valuable extra wild alongside the Seer and rather than a single random reel being highlighted with expanding wilds, anything between 2 and all 5 reels can be affected.

Any 3 or more scatters appearing in a free spin will add 1 extra spin per symbol to the end of the round.

More skulls will open up a special bonus round which sees 15 flaming craniums with horns on them spread across a seperate screen. The aim is to click these demonic images to reveal cash prizes or to uncover another route of entry to the Doom Spins.

If the House of Doom logo is found in a skull, the round ends with a multiplier payout, while other skulls can give players further picks in this rewarding feature.

More About The House Of Doom

Released on both desktop and mobile platforms, this slot game invokes the extreme Heavy Metal style and can be played for coin values of between 0.01 and 10.00 per line. It comes with a 96.11% return to player ratio, and with the guarantee of fair play that's seen across all Play'n GO games.

With a little bit of dark humour, the developer has given this game the internal ID code of 666, or 100666 for the mobile compatible version.