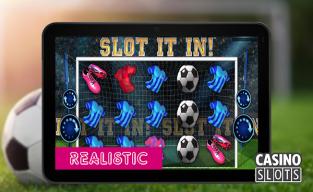 Realistic Games has announced the launch of their latest slot game, with Slot It In!, a Soccer-themed game which gives players an open goal on claiming winnings. It's a 5-reel, 10-line game that's filled with colourful boots, shirts, trophies and the referees whistle, and where stacked symbols award bonus spins.

Kicking Off With Slot It In!

This mobile and desktop-compatible slot game plays out against a backdrop of a goal and stadium filled with Soccer fans. Symbols can be stacked and when all reels are filled with the same symbol, players are awarded a free respin, which can be repeated if the reels are again filled with a single type.

The simple gameplay can bring in lots of winning spins and can now be found at the many online and mobile optimised casinos that carry games and software from this popular developer.

“By combining one of sport’s most talked about events with great football-themed graphics, a big bonus round, and a soundtrack to boot, we are confident that Slot It In!™ will become a winner.”