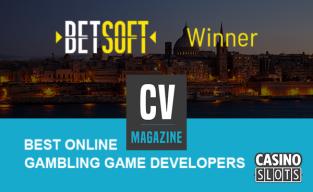 The first Corporate Vision magazine Media Innovator Awards ceremony has been held, with games developer Betsoft winning one of the top accolades.

The Best Online Gambling Game Developer award 2019 went to Betsoft as recognition of their ground-breaking content. Judges noted that Betsoft has a long history of innovation, with their range of 3D slots revolutionising the online casino scene.

Since Betsoft launched their first games in 2006 they have continually shown that they are leaders in the field. The team of designers, developers, and artists at Betsoft have created a range of cinematic slots which have proved to be hugely popular with casinos and players.

The Corporate Vision magazine awards have also been created by a dynamic, innovative team. The awards celebrate achievements across a wide range of industries, not just online gambling.

It comes just weeks after Betsofts' success at the G2E Asia ceremony, where they scooped the B2B Digital Product award.

“This award-winning company has consistently developed new and innovative products which have proven to keep their customers engaged and coming back for more. As such, they are worthy winners of Best Online Gambling Game Developers 2019.”