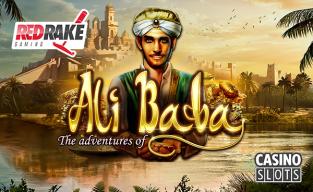 Players can go on an Arabian quest with The Adventures of Ali Baba, a new slot from Red Rake Gaming that is now available at online and mobile casino sites.

The Adventures of Ali Baba is a 6 reel slot, crossed by 50 paylines. The stunning artwork brings the opulent style of ancient Arabia to life and includes symbols of swords, teapots, vases, and treasures. The reels spin against a realistic backdrop of palm trees, city walls, and a river.

Morgiana, the beautiful belly dancer, is a wild symbol and she can cover several rows at a time to make it easier for players to land winning combinations. Randomly, a tornado will spin across the game, copying a reel to complete wins.

Ali Baba himself turns up as a scatter symbol. If he's seen in any 3 or more places, he stays locked in place as the rest of the reel positions respin for free. The respins carry on until 6 scatters have appeared, or until no new Ali Baba symbols land. If 6 scatters are seen at the end, this then triggers a free spins bonus round.

During the bonus games, any valuable gold symbols that appear will remain locked in place, helping to create some high-paying treasure chests. Each nugget of gold can fuse with adjacent ones into 2x2 or 3x3 chest symbols. These multiply wins by 2x or 4x

The free games carry on until the image of 3 thieves turns up. They won't appear until the gold symbols have filled up a meter, or until wins of 15x the triggering stake have been claimed. Once the thieves show their faces, one more free game plays out and the round then finishes.

The Adventures of Ali Baba can be played for at online and mobile compatible casino that features the Red Rake Gaming range. It can be played in multiple currencies and languages, which will make it appeal to players across regulated markets.

The Asp of Cleopatra