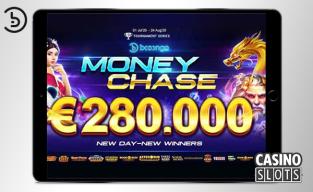 Boongo has announced a new Money Chase tournament that runs from 1st July and has a prize pool of $280,000 for players to claim. It's part of their new Tournament Series, which rewards players for the best win multipliers, rather than the number of points accumulated.

Play Across The Booongo Range

The Money Chase runs for 8 weeks, with a daily prize pool of $5000. Points are awarded for either the biggest win multiplier, or the highest single payouts, which gives all players a chance to scoop the top prize, no matter what their stakes are.

A weekly leaderboard has a bonus prize pool of $10,000 to be awarded at the end of the Money Chase tournament. Players can win across the Booongo range, which includes hit slots such as Olympian Gods, Moon Sisters, and Aztec Sun.

It all starts on 1st July, 2020, across the network of online and mobile casinos that carry the Boongo range.

“Our new Tournament Series rewards players for the best result and is available to play throughout July and August. This is sure to make it a memorable summer for all the right reasons for a number of lucky Booongo players.”