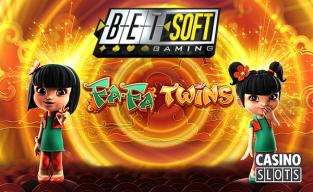 It's no surprise to anyone that new releases from BetSoft get a lot of attention because they have a reputation for putting together top-tier titles on a regular basis. The Fa-Fa Twins is no exception, and it's been released by this company in the past few days. This game has an interesting Asian theme with a twins motif, and this plays directly into the gameplay itself.

The best slots out there today, and this means the ones that get the most attention from players for a longer period of time, are the ones that combine their themes with the features that produce the actual gameplay. The point of this is that it creates a cohesive and immersive experience all-around, and that's what boosts the enjoyment for players. This is the case with how the Fa-Fa Twins video slot has been put together, and while you'll see the twins standing beside of the reels and in different symbols on the reels themselves, they also influence gameplay with this motif.

The main feature that primarily drives most of the gameplay on a spin-by-spin basis is the Twin Reels feature. The way this works is that, whenever your spin starts, two reels are chosen to sync up with each other. These reels will be twins in the sense that they will show the same three symbols in the same order, and they will always be adjacent to each other. This can expand to cover three or more reels at random, and it's easy to see how this will give players a tremendous opportunity for big wins thanks to the 243-ways format.

This game is another release from BetSoft that we think will do well with players. It has a fun gameplay aspect to it, and it uses a low-volatility style of play with a high hit-rate that has been getting a lot of attention from players. The bottom line is that players will always get something great from this company, but seeing them release new titles like this on a regular basis is a lot of fun and puts even more faith into them.