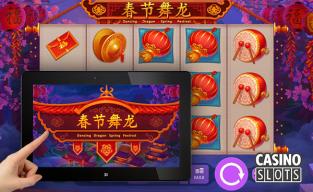 There is no denying that players can find tons of Asian-themed online slots in the industry as a whole, and some players might question why they need yet another one. However, before you judge Dancing Dragon Spring Festival by its cover, you should take a look at the gameplay elements that make this game stand out as a very exciting release for the first quarter of 2017.

The gameplay is designed to be straightforward with two key wilds. The regular wild symbol pays out like you'd expect, but the Dancing Lion is a different type of wild that pays out no matter the direction of the payout or where it falls on the reels. It's really a cool way to give players atypical payout that they wouldn't receive otherwise, and it's the type of thing that we really like to see in terms of innovation on the basic aspects of gameplay that make a real difference for players.

The top jackpot in this game is a bit different than other games because it's based on getting 15 of the stacked dragon symbols to cover the entire game screen. This gives you a win worth 5,000 times your entire bet size, and that's a pretty huge win. It's actually one of the largest non-progressive wins that Playson has available in their entire portfolio, so it's important to understand the gravity of that. As far as big wins go in this game in general, you'll have plenty of chances to win in major ways, especially with the wild symbols that pay independently of the payline structure.

Playson isn't known for trying to be a major contender in the top tier of online slot providers, but they do have a good selection of solid titles. If they wanted to build momentum and reach a higher level in the industry as a whole, right now is the time to do it because there's no doubt that this game represents an opportunity to build some serious momentum in 2017. Whether they decide to do that or not is still up in the air, but it's what we would like to see for the players.