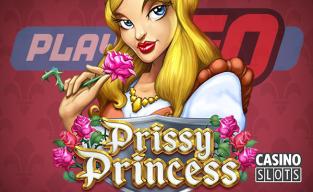 Play 'N Go has made their hottest release of 2017 so far with Prissy Princess. The name might make you think that this game is going to have a lot of pink and be targeted towards a female audience, but it's actually a medieval title with lots of knights, dragons, armor and swords. The real thing to notice here is the gameplay, however, and they've done a great job of making it stand out from other slots.

The first thing to notice is that there are actually two wild symbols in this game. The blonde princess from the name of the game is one of the wilds, and she works pretty regularly. However, there is also a dragon that can show up on the reels. If you don't get any winning combinations, you can trigger the Dragon's Breath feature as well that will kick up to three wild symbols on the reels to give you chances to get wins that you would have missed otherwise.

The Crumbling Towers feature is a feature we have never seen before. The way this works is that whenever you get a winning combination, the complete reels that hold the winning symbols crumble to allow new sets of symbols to fall into place. It's not just the winning symbols that disappear, but instead, the entire reels do. This makes it easier to hit multiple winning combinations in a row on the series of free spins. Make it to the fifth re-spin, and you'll get a special treasure chest that opens (the one with the five locks on it at the top of the screen) for a special payout.

There are two competing objectives in online slots today: graphics and gameplay. Play 'N Go tends to take an approach where they want to give above-average gameplay with top-tier graphics, which fits well with most players' preferences in the industry as a whole. It's a good way to make sure that players always have something interesting to play since they won't just get tired of the graphics and leave like they would with titles that don't have solid gameplay.