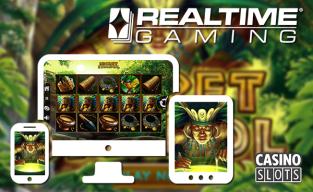 Realtime Gaming is known for really getting their online slot production together over the past few years. They faced a ton of criticism for quite a while for "phoning it in" as far as not really seeming like they put a ton of effort into producing their games. That all changed, and now they're regularly turning out titles that are well above-average. Secret Symbol, their latest upcoming release, falls well within those bounds.

Secret Symbol is a 25-payline video slot with a progressive jackpot. It's based on the mysterious symbols of the lost Aztec civilization, and it has everything from solid graphics to a serious soundtrack to help players immerse themselves in the gameplay. This title has a free spins bonus feature where each free spins gives players a different multiplier that can go all the way up to an incredible 20x. There are also expanding wilds during the free spins, which gives players even more value.

This release will happen on March 15, 2017 first at Springbok Casino. They have a deal that sees them get certain RTG releases first, and this is one of them. After a short while, it will be available at other online casino sites that use their software as well. Springbok Casino is one of the top site for South African players, and this is one way that they help to keep a buzz about themselves. Every time an exclusive release like this one comes out, they get a ton of attention, and that's one of the reasons why they are considered by many to be the best option for players from South Africa.

Realtime Gaming has been slowly building up momentum over the past few years, and 2017 could definitely be their time to shine in a major way. They'll need to keep it up with high-quality slot releases, and they'll need to get their games in front of even more players with strategic deals. However, while we don't know how that will go this year, what we do know is that Secret Symbol is going to be a game that players are going to love because it has a lot of ways to hit top-end payouts.