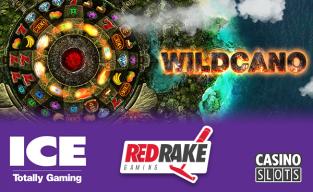 Paradigms exist in any type of industry, and in the slots industry, this is no different. The earliest slots used three reels with paylines that went from left-to-right across the reels, and modern video slots, even those on the cutting edge, use largely the same layout. Moreover, attempts to break from this layout generally involve only slight changes on the general theme. Red Rake Gaming's Wildcano slot made its debut at ICE 2017, and it breaks this mold completely.

Even when we look at atypical formats, it's clear that what's available in the slots world right now is based on rectangles. From the three-reel, one-payline slot to the five-reel, four-row and 1,024 ways to win games, the entire structure is rectangular in nature. Red Rake Gaming's Wildcano turns this entire format on its head by basing things on circles instead, and this creates a radical departure from the traditional style of slot.

Not Just a Gimmick

This circular experience is not just a gimmick, like what you might see with other games that claim to have an atypical approach. Many titles just throw something atypical in with their format and hope that the game gets popularity based on that. Wildcano, however, is much different because it has excellent graphics, both on the circular reels and with the background. There's a very strong and immersive soundtrack that comes along with this, and everything is centered around the volcano that you're trying to get inside of.

Once players get inside of the volcano, they'll face off against the Wildcano god with value-packed free spins that are all about giving players tremendous opportunities to win big prizes.

The reception for this new title was extremely strong, and we think it's a good bet that other software developers will be following Red Rake Gaming's lead with this type of circular format. Along these lines, we would be surprised if we didn't see other companies debut similar titles in the next several months because this could very well become the next virtual frontier for the online slots world.