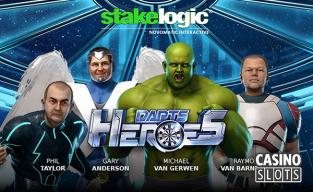 In a move that gives industry figures a lot to think about, StakeLogic has launched their most recent title: Darts Heroes. This is a 3D slot that shows off what this software developer has to offer on the graphical side of things, but it also centers around a sport that hasn't gotten much attention from the slot industry until now.

This game is centered around four popular, top-tier darts players. They are Mighty Mike Michael van Gerwen, The Flying Scotsman Gary Anderson, Barney Raymond van Barneveld and The Power Phil Taylor. They actually came together to introduce the game at the International Casino Expo last month in London, and it was a pretty big deal to have top players in a sport debut a slot in this way. Along these lines, the launch of the game actually comes from the Kindred Group, previously known as the Unibet Group, at a number of their online brands.

An important thing to note about this release is that, in spite of it being a 3D title, it's release comes simultaneously for both mobile and desktop. In the past, we would see situations where graphic-intensive titles would be released on desktop only, or at least the mobile release would be delayed several weeks or months. This is not the case with Darts Heroes, and we're glad to see that StakeLogic is sticking with their previously established pattern of releasing titles on multiple platforms at the same time. This helps to make sure as many people as possible are able to get in on the action.

StakeLogic's most recent release is a good example of them taking advantage of the momentum that they have had building for quite a while. They have been doing more and more each quarter and each year for a while now, and this includes a big push after coming under Novomatic's umbrella. Some people assumed they would just be absorbed into ordinary operations, but that's not been the case. Instead, they've been put in a position to innovate in a major way, and we hope to see that continue in the future.