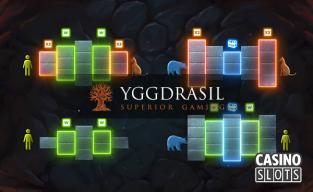 Video slots are by far the most popular type of game in the casino world. Whether online or in land-based facilities, you'll see more slots than all other games combined. Unfortunately, because there are so many games in this genre, they have really been pushed about as far as most people think they can go in terms of new features and concepts. Yggdrasil Gaming's Fusion Realms game mechanic, however, looks to change that.

The Fusion Realms mechanic is designed to allow different sets of reals, features and other characteristics to be mixed and matched from different games. The idea is to provide a software foundation for building larger game worlds, and this creates a situation where you can see several different reel setups, features and environments within the same game. They're looking to first debut this game mechanic concept in The Jungle Book, a title they're releasing later in 2017, and it's going to really put the tool on display in a major way.

Yggdrasil has been known for their tools and expanding the reach of online slots since way before this. Their BRAG platform for social media sharing is a great example. They are one of the companies that are really looking to push things outside of the box, which is something we can definitely get behind. Fusion Realms is another example of a tool like this, but when you think about how the effects of their tools could be combined, it creates a lot of different situations where Yggdrasil could really see a huge boost this year.

Over the past few years, Yggdrasil has made some pretty significant strides in getting bigger and putting out more high-quality titles. It's an extremely exciting time for players who enjoy online casinos that feature their games with the release of the Fusion Realms mechanic coming later this year with The Jungle Book slot. They are pushing the boundaries of what's considered normal in the industry, and that's exactly what we need to be seeing from companies right now. Overall, it's a good time to be an online slots fan, and we look forward to seeing how they do with this mechanic coming out.