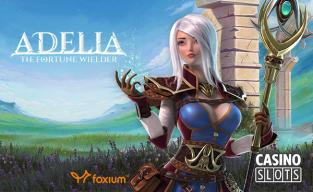 Estonian-based games developer, Foxium has just released their latest slot, with Adelia The Fortune Wielder being themed around the adventures of a young woman as she's sent on a quest by a mysterious sorcerer to find hidden riches.

Played out over 5 reels, with 20 paylines, it's a stunning game that features 3D-effect graphics and animations, and where bonus features such as free spins with multipliers can lead players to some riches of their own.

About Adelia The Fortune Wielder

The impressive design of this slot machine makes it look like a high-end console game, or animated movie. Richly-decorated symbols spin against a detailed backdrop of statues, castle walls and fields of lavender, while Adelia herself stands to one side of the game.

Along with the playing card symbols, there are images of weapons, spell books and Adelia's bag, plus a wild symbol that will complete winlines when it's in the right places. Special multiplier wild symbols will boost the value of wins by between 2x and 5x, while a stack of wilds triggers a free respin of any remaining reels, giving players a second chance at landing a winning combination.

Between 10 and 30 free spins are triggered when the scatter symbol appears, and during these games, coins are collected in 3 treasure chests. Once the chests are full, higher winnings are paid out for different symbols, making the free spins a great bonus round for those seeking their own treasures.

Adelia The Fortune Wielder is available now through Microgaming, at the many online and mobile casinos which feature the range from this popular developer.

As a studio we are extremely critical about our own products. It is important when you release a new game to feel that it is better than anything you done in the past. That is how you grow as a studio. With Adelia The Fortune Wielder we have achieved that