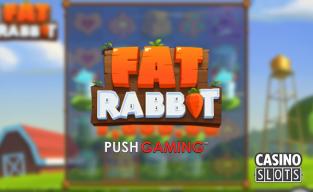 The Fat Rabbit slot comes out on March 27th courtesy of games developer Push Gaming. It's a fun, cartoon style game where the star of the show is a hungry white bunny who hops around eating carrots while awarding players with extra win lines and bonus features such as a rich free spins round.

Hopping Onto The Reels

It's 5 reels and 50 paylines are filled with a range of farm-themed symbols, such as bales of hay, a metal bucket and mean-looking dog, along with the playing card Clubs, Spades, Hearts and Diamonds, but the character that players will be looking out for is the Farmer, as he pays out the top awards, while the Fat Rabbit himself is a wild symbol that replaces others to complete winning combinations.

If the Farmer ploughs a furrow through the reels, he will uncover a series of carrots which also act as wilds, but players who see a single rabbit and single carrot land in any spin will be awarded with free spins.

To help turn the free spins into an especially rich crop, the Rabbit will stay on the reels throughout the five bonus games, moving around as he eats his way through any more carrots that appear. As he eats more of them, he grows fatter and fatter, taking up more places on the reels, and as this is a wild symbol, it becomes easier for the Rabbit to complete combinations.

A fatter Rabbit will also award extra free games on top of the initial 5 bonus spins, and it's possible for him to eat so many carrots that he fills up all places on the reels, becoming a giant 5x5 bunny that awards a massive prize equal to 2000x the triggering bet for every remaining spin.

Fat Rabbit bounces its way into online casinos on 27th March, where a very happy Easter awaits those players who can feed him enough carrots.