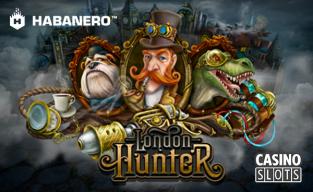 Set in a Steampunk version of Victorian London, where an escaped Tyrannosaurus Rex is causing chaos, London Hunter is the latest slot game from Habanero. Set for release at desktop and mobile-optimised casinos in the near future, this 5-reel, 25-line slot has advanced graphics, a unique theme, and comes with a host of exciting bonus features for players to enjoy as they set about recapturing the dinosaur.

Behind the impressivly-designed reels, which feature Victorian sci-fi elements, there's a view of London as we've never seen it before, where the tower of Big Ben stands next to huge metal tubes that soar into the sky. This striking image matches the retro symbols that include ornate high-card icons, fantastical weapons, a bowler-hat wearing bulldog and a distinguished monster hunter, along with the T-Rex.

A strange backpack triggers in-game bonuses, where the dinosaur is an expanding wild symbol, and where win multipliers are handed out, all accompanied by some impressive animations, such as the wild T-rex roaring as the hunter zaps him with his ray gun.

A free spins round also has multipliers available, while extra bonus games can be added on for an even more rewarding feature. There's some big bounties waiting to be claimed when the hunter defeats the T-rex in this cinematic style game, that's due for release in the first week of March.

London Hunter’s latest technology recreates Victorian Britain beautifully and we’re sure the game will appeal to those seeking a fast-paced, high-quality, cinematic experience. Players will need to have their wits about them with T-Rex on the loose, but i

Launched in its present guise in 2012, Habanero has offices in a number of countries and produces multi-lingual slots for a worldwide market. Diverse themes, styles and features are found across their expanding range of games.