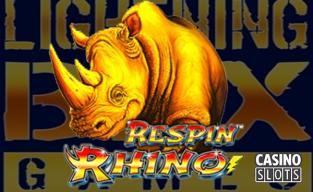 Hot on the heels of Mild Rockers comes the next slot game from Lightning Box. Respin Rhino takes the classic theme of African wildlife and charges a high-paying Rhino symbol through the middle of it, awarding some of the biggest wins and locking in place during a special bonus feature.

This 5 reel online and mobile-optimised slot comes with 40 paylines, across which symbols of elephants, tigers, eagles and monkeys will appear, while lower-value winlines are made when the playing card icons 9 through to A land across a line, all accompanied by an authentic soundtrack.

A village woman is the wild symbol, and she will expand to fill any reels that she lands on, making it easier to complete combinations, but the main feature is triggered when golden symbols stop in the same positions on reels 1 and 5. They will all transform into the Rhino and stay locked in place while the other reels respin 3 more times for free. Should the wild symbol appear, the round is retriggered, with up to 9 respins possible.

Where To Play Respin Rhino

The game will be exclusively available at GVC Holdings brands, such as bwin from 14th March, but only for 3 weeks, as from 4th April, it will become available to all Lightning Box casinos.

A Little About Lightning Box

Based in Sydney Australia, Lightning Box has been at the forefront of innovation, with their slots range each having unique features and gameplay. Founded in 2004, their games can now be found at land-based, online and mobile casinos, where slots such as RedRoo, Dolphin Gold and the Stellar Jackpots games like Serengeti Lions are regularly listed among the top performing titles.