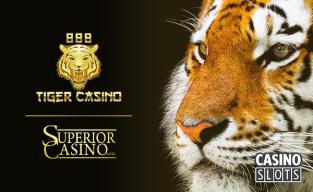 In a recent press release, the Superior Group, which operates a number of popular online casinos, announced that they have aquired 888 Tiger Casino. The purchase of this site means that Superior Group will be able to expand thier worldwide reach.

A New Dawn For 888 Tiger Casino

The change in management is designed to re-vitalise 888 Tiger Casino and bring it in line with the expectations of its loyal customers. It will now be run by Pascal Chevalier and his dedicated team of casino experts, who have made Superior Group so successful.

24VIPCasino and SuperiorCasino are already run by the group, and the addition of 888 Tiger to the family is an important milestone in their continued growth.

Tigers are seen as powerful creatures that are corageous and determined. This image perfectly matches the aspirations of 888 Tiger players. The number 8 also has special significance in many markets, as it's seen as a symbol of good fortune.

This action-packed casino is powered by Rival, BetSoft and Vivo Gaming, who are known as developers of some of the most exciting casino games in the world. BetSoft have a range of stunning 3D slots, while Rival boast their I-Slot games, which have stories unfold as players spin the reels.

888 Tiger Casino also features a special Live Gaming Lobby, where real games are broadcast from studios directly to players desktop computers or mobiles. Generous bonus deals and regular promotions reward customers even further, while the option to play using multiple currencies is yet another reason why 888 Tiger Casino has become so popular.

Now that 888 Tiger is part of the Superior family, the future for the site and its players, has never been brighter.

“888 Tiger Casino has been brought back to life with the goal of providing players with a complete and world-class online casino experience”. “Thusly, the acquisition of this casino mainly focuses on driving players’ engagement to a maximum level”